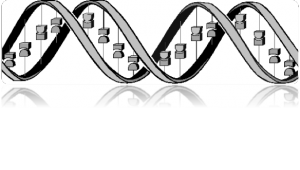 Genetic Algorithm is a directed search algorithms based on the mechanics of biological evolution developed by John Holland, University of Michigan (1970’s) to understand the adaptive processes of natural systems and design artificial systems software that retains the robustness of natural systems this algorithms provide efficient, effective techniques for optimization and machine learning applications so it is widely used today in business, scientific and engineering circles.

Charles Darwin Theory: “Living organisms are fighting the forces of nature to survive. Those who are the fittest (strongest, fastest, biggest) are most likely to survive, Those who survive mate and reproduce (selection) and children are similar (inheritance), but not exactly like parents because of cross-fertilization and mutation, thus children can be more or less fitness than parents also, Children repeat the path of their parents, after several generations the organisms become much fitter.”

Suppose that there are many possible solutions for the problem: x1, x2, x3, x4… The main idea is to view each solution xi of the problem as an individual living organism. The number of possible solution can be incredibly large n ◊ ∞, so we consider m < n and chose a Population: P(t) = {x1t, x2t, … , xmt} ,with time the organisms and the whole population will be evolving.

Crossover is replacing some genes in the parent by the corresponding genes of the other.

Mutation is randomly choosing a gene and replacing it with other gene; mutation helps to add diversity to the population and help avoiding local maximum

Fitness Function is a function that tells you how good the individual is. 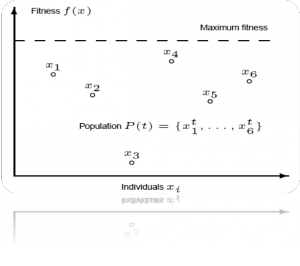