We have a set of teachers who needs a schedule for a set of subjects over a set of periods, this schedule must take into account characteristics of periods of week, the limited availability of teacher and rooms, and some constraints which should be fulfilled.

The problem of assigning teachers to subjects and groups for timetabling problem has been studied by many authors. Tillet (1975) was the first to address it, using an integer linear programming model.

Then other authors like Shih and Sullivan (1977), Schniederjans and Kim (1987) and also Badri et al. (1998) developed linear programming models a different approach is followed by Dyer and Mulvey (1976), Bloomfield and McSharry (1979), Mulvey (1982) and Dinkel et al. (1989) who developed capacitated flow models for the problem.

Our timetabling problem has the following elements:

1.2.3 - Problem Elements (Objectives and Constraints of the Problem)

In a course timetabling problem, generally, constraints are considered in two types. One of them is called hard constraints. Every acceptable timetable must satisfy these Constraints, they are:

Those soft constraints are:

Harshly saying, the classes are organized into the following hierarchy: 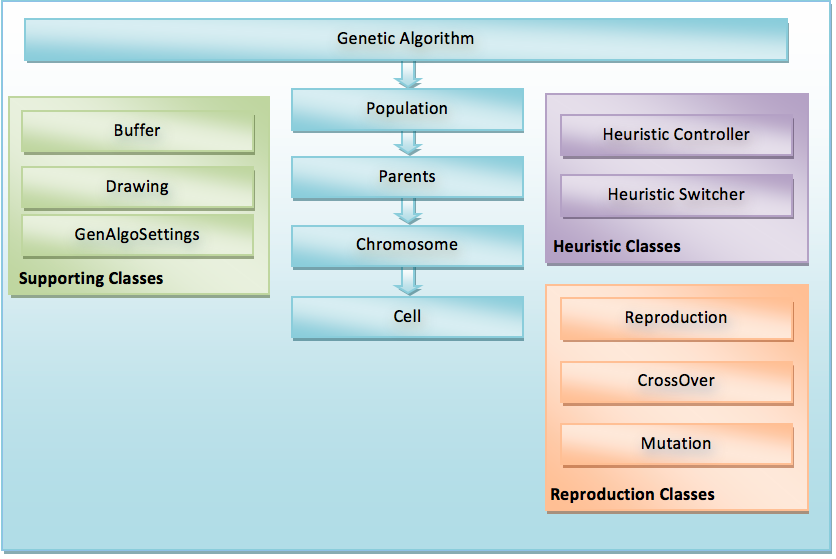 Each of the above stated classes are described below in detail: 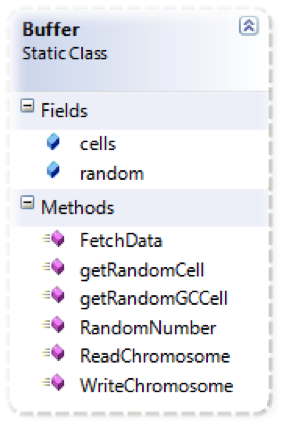 Buffer is a static class that is used in order to communicate with the database and buffer some data. This will speed up the performance and make communication with the database easier.FetchData() – method fetches the data from the database by executing the “SELECT ALL” query, in order to speed up performance of the systemgetRandomCell() – fetches random cell, which should be validgetRandomGCCell() – fetches the random cell, according to the provided groupid argumentWriteChromosome() – saves the provided chromosome to the specified text fileReadChromosome() – reads a saved into text file chromosome and returns it as a result of the method. 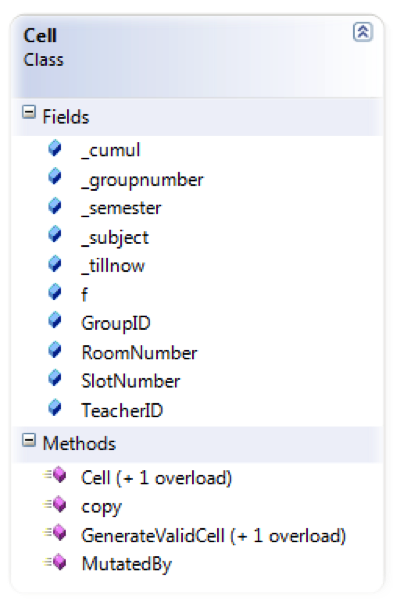 Cell class represents the smallest building block of the chromosome. If we want to define the chromosome as a schedule, than we can define a cell as a one-slot entry, which specifies the slot number, teacher, room and subject and group to be taught.We provided the cell object with a copy construct, to return a new instance copy of the same cell. Also as we can notice from the above description, GenerateValidCell() will perform a call to the getRandomCell() / getRandomGCCell() of the Buffer static class in order to make current cell as a generated random valid cell, with or without the pre-specified groupid value.MutatedBy() method will accept a value, indicating what is the mutation performed by, and perform a mutation on the cell, executing the corresponding query. The available mutation types are: mutate by all (new generated random cell), mutate by group, mutate by period, mutate by room and mutate by teacher. Notice that the result of the mutation will be a valid cell._cumul property is very important when counting the fitness function. As the fitness function iterates through the current cell, the _cumul property will record the cumulative impact of the current cell on the fitness function total value._tillnow property will be also important as it also record the cumulative impact, but not totally cumulative, but just on the period of last genAlgoSettings.CrossOverCellNumbers number of cells. Then it can be used in future to define which interval of chromosome had the greatest impact on the total fitness function value.f – the flag which will indicate if the current cell has any contribution on worsening the fitness function value. Can be helpful in drawing the chromosome and coloring the bad cells. 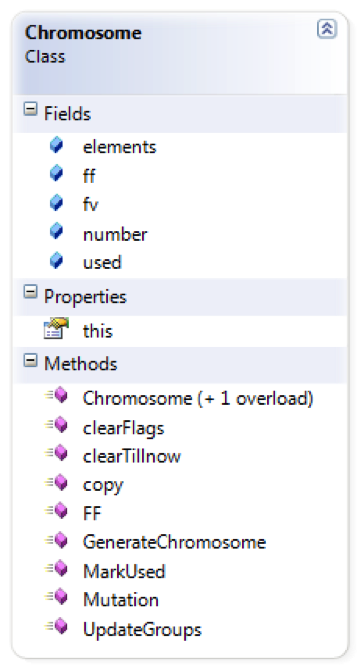 clearFlags() – clears all the flags f of a cell

clearTillNow() - clears all the _tillnow and _cumul properties of the cells to be reused when transferring from the current population to the new population.

UpdateGroups() – retrieves and updates the groupid’s values of each cell in the chromosome, according to the _subject and _groupnumber properties. This will ensure the consistency of data, when the chromosome of some old data was saved, and need to be retrieved, but the values of the groupid’s has been changed.

Mutation() – mutates the chromosome, using the procedure defined in the Reproduction.Mutation.Run() static method. 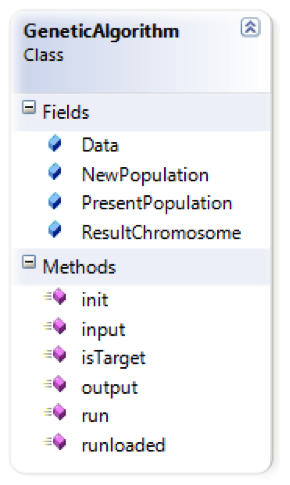 This is considered as the main class of our implementation. The GeneticAlgorithm class is responsible for the main code flow management. The class contains several essential properties, which contribute to the work of the algorithm:

The algorithm consists of the three major parts: init() – initialization, connection to the database, and preprocessing of the data, input() – generating first random PresentPopulation, which will be the initial seed of the program, and run() – implementation of the algorithm itself to obtain the ResultChromosome using the PresentPopulation seed.

The algorithm checks for the number of consequent bad results. If it is more than GenAlgoSettings.SteppingNumberThreshold, than the whole heuristic after several number of chances is considered as bad, and a next heuristic is executed within the takeAction() method. 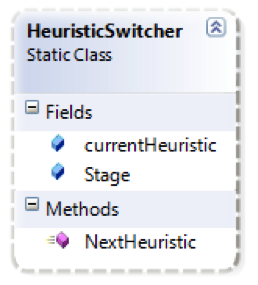 Heuristic Switcher checks for the currentHeuristic number and redirect the program to the next heuristic using the NextHeuristic() method. A heuristic within our implementation is defined as a set of values for optional attributes, such as mutateby, CrossOverNumber, MutationNumber, SteppingNumberThreshold, SmartCrossOver and CrossOverCellNumbers. Using these parameters we will be able to define specific heuristic, way of reproduction that can be used by the parent chromosomes to reproduce in different ways. The Stage parameter saves the value, defining if the program is current running in the hard or soft stage. 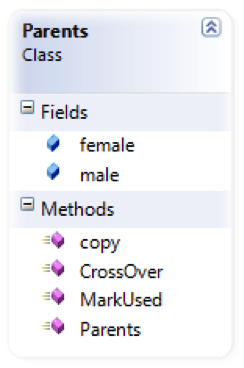 A male and a female chromosome is considered as parent, which will in future reproduce to obtain a better population. This parent object has a copy() constructor, which will call the copy constructors of both the chromosomes to produce a completely new copy of the parent instance.CrossOver() is a method which will recall the Reproduction.CrossOver.Run() in order to following the specific procedure for the current parent chromosomes. MarkUsed() will mark both the parent chromosomes, male and female as used. 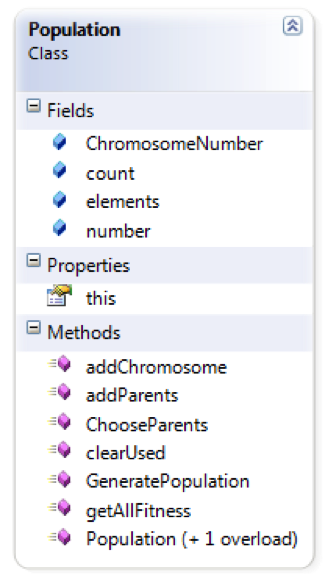 getAllFitness() – perform fitness function execution FF() for all the chromosomes in the population. 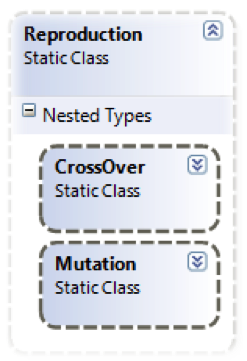 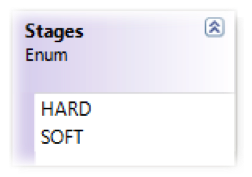 Stages Enumerator – indicates the HARD and SOFT stage of the running the algorithm. This will determine the fitness function count method chosen and the heuristics and their order.